How Beautiful the Boring Games You Played as a Child 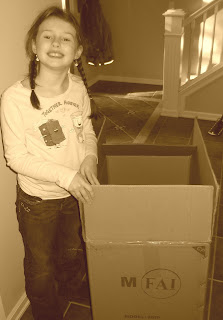 “So, Dad,” said my 8-year-old daughter, Addy. “What are you going to get me for Christmas?”

“A stick, a cardboard box, and an old potato,” I said with an absolutely straight face.
“Hmm,” she said. “That doesn’t sound like much fun—except for the cardboard box.”
Addy grinned in seriousness. The child can transform a box into anything. Her life is presently immersed in Barbies, and over the past season, for her collection of dolls, she’s constructed a schoolhouse, a theater, a restaurant, and an airplane—all made from cardboard boxes.
Oh sure, she enjoys her share of pre-made toys. Under the tree this year she’ll find plenty of new ones. Electronic whatzits and online whozits and fantastical contraptions that screech and boogie and leap and croon.
Yet mistake not the quiet call of a cardboard box in a child’s life.
When a kid can create her own fun, as a parent I respect that.
I respect it a lot.
Dewitt Lowrey, one of the original Band of Brothers, was telling me about the games he played as a kid growing up in Alabama during the Great Depression. One was called Mama Pig.
“You took an old Barlow knife with three blades and put the littlest blade in the ground,” Lowrey explained. “Then you tried to flip it to make the knife stick on the big blade.”
Clear joy filled his voice when he told me about Mama Pig. The game sparked a recollection, a remembrance of simpler times.
But then he shook it off and added, “Oh, but it would be far too dull for kids to play today.”
Maybe, I thought. But maybe not.
When my wife was a kid in the 1970s growing up in Ventura, California, she and a neighborhood friend created their own game called “Hide From Cars.” When I asked Mary to explain the game she shrugged nonchalantly.
“Well, that was it,” she said. “Cars came down the road, and we hid from them. It was a hoot.”
I understood perfectly. During winters in Canada when I was a boy, I chopped ice off the big rocks in our backyard. It must have appeared dull compared to anything you’d find in a store. Nothing to plug in or make noise. No lights or bells, whistles or scores. A real dud in the grand scheme of games.
But, oh it was exhilarating. Can you picture it?
You grabbed the ax firmly and went chop, chop, chip.
The ice slid off in slabs.

Sometimes when you swung your ax against the ice, the ice groaned and fought back. But you drove the ax down again harder, and up sparked a shower of powder. The wind whistling off the lake caught the fine frozen particles and carried them north into unknowingness. You felt shivery but powerful. It was your ax that broke through the blockage. Your sweat.

In the hands of a 10-year-old boy, you couldn’t buy a game that made you feel so grand.
I believe that every generation, no matter how much we insist we’re different from other generations, is basically the same. When we’re kids, we all enjoy our self-made games. Those games get placed into the enormous blender of who we become, the mixture of wonder and mystery, creativity and color.
How beautiful our boring games. Our cardboard boxes. Our Mama Pigs. Our Hide From Cars.
Maybe they are not so boring after all.
This Christmas, let more of those games begin.
Question: What “boring” games did you play when you were a kid?