Two summers ago I found myself at a book signing event seated alongside seven of the original Band of Brothers, the men of Easy Company who have become symbols of heroism in World War II.

I sat near the tail end of a long table. The men and I were on one side, and a crowd of well wishers on the other. The line of people in Pennsylvania that day waiting for autographs and to shake hands with the men stretched for—literally—an hour in the hot sun.
To my left sat William “Wild Bill” Guarnere, and to my right sat Edward “Babe” Heffron. To tell you I felt out of place between two legendary WWII heroes as well as with the rest of the men in that lineup is an understatement. But two of my books were there, being frequently passed down the line and signed by the vets. Thus I sat, scribbled my name, and kept my mouth shut. 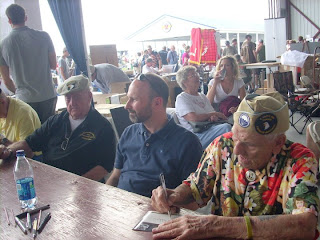 After a few hours, Mr. Guarnere announced he’d had enough. He doesn’t sit well for long. Wild Bill gathered his crutches and left for beers with a woman half his age. He’s a colorful figure, which you know if ever you’ve seen him. A larger-than-life American hero.

Babe Heffron signed for the rest of the day, pausing only to debate baseball and curse anyone who wasn’t a Phillies fan. Babe is less flamboyant than Bill, and bluntly authentic, with never a hint of pretense to anyone in line.
We spoke directly a few times, Babe and me.
Babe asked who I was and why I was there. When I showed him my book, he raised an eyebrow. “Well, good for you,” he said, his voice like gravel.
When people in line kept calling him “Mr. Heffron,” and he kept saying, “Just call me Babe,” I said, “Mr. Heffron was your father’s name.” And Babe laughed. “That’s a good one,” he said. “I’ll have to remember that.”
After a dozen autograph seekers had looked disappointed and asked Babe where was “his good buddy Bill,” I said, “I’m curious if you get tired of being asked that.” And Babe grinned wryly. Bill and Babe are best of friends—(read their book)—but there was transparency in Babe’s eyes, too. You could tell that the same question repeated so many times had irked him.
I left the lineup early and went to secure a wheelchair for one of the vets who’d been having difficulty walking. I had been helping this man throughout the weekend of the event.
As I headed back to the signing table from the holding station where the wheelchairs were kept, Babe was already headed for the street, homeward bound. He was surrounded by well-wishers and he walked with confident, easy strides.
When he spotted me, he broke away, headed over to me and shook my hand, then kept going without another word. 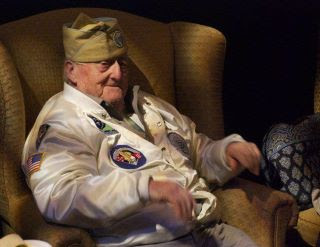 I’d like to think we connected that day, a military hero and a young author, signing books together in the Pennsylvania summertime.

Yet I doubt if the connection was forged by the books or the jokes or even the deeper question I’d asked and Babe had been gracious enough to field.

Because there’s one more important thing to tell about that day. I think it’s what won Babe Heffron’s respect in the end. It speaks highly of the type of man he is, and the depth of brotherhoods he’s formed over the years.

And I mention this last bit of the story out of tribute to Babe, not me.

The man who helps Babe travel, a man who knows Babe well, pulled me aside and said, “Babe doesn’t do that, you know. He doesn’t shake hands like that with just anyone.”
“I wonder why he did that for me,” I asked, and shrugged.
The man pointed to the wheelchair. “Because you’re taking care of his friend.”
Question: What’s the best thing a friend has ever done for you?