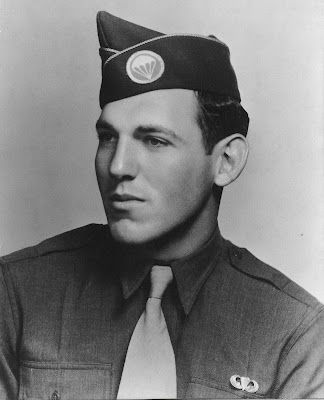 After the Allied invasion on D-Day, the enemy was fighting hard to keep their clutches on the cities they had stolen.

PFC Ed Tipper’s job was to go street by street in the strategic occupied French town and clear houses. That meant throwing a grenade through a doorway or window, rushing in, and ferreting out the enemy. Civilians had long since left the area.
At the very first house, on the very first doorstep, Tipper was poised on the front stoop when a rogue mortar shell whistled in and exploded. The blast knocked him back in a fury of dirt and broken brick building.
Tipper felt no pain immediately, he said in a recent interview with me, although his right eye was destroyed, and both legs were broken.

Remarkably, Tipper, a paratrooper with E Co., 506 PIR, 101st, the elite unit that eventually became known as the Band of Brothers, stayed standing and didn’t drop his weapon. His good friend, Joe Liebgott, sprinted over and helped him sit.

“I reached up,” Tipper said. “My helmet had been blown off. My head felt like a watermelon, swollen and mushy, and blood was everywhere. I was in shock, and my muscles had all tensed—that’s the reason I was still able to still stand.”
With mortar fire still pounding the street, Liebgott and Lt. Harry Welsh carried Tipper a block and a half to an aid station. Tipper was evacuated to England and eventually the States. His fighting days were over.
For months, Tipper was in bad shape, but eventually his broken legs knitted back together. The Army fitted Tipper with an artificial eye. In 1945, Tipper was pronounced well and discharged from the military.
But maybe he wasn’t completely well. Inside, for a while, he may have teetered. As a returning vet, Tipper faced choices. He could have become bitter and dropped out, he admitted, but instead he chose to go the other direction, and certain acts of others helped him do that.
Despite battling reoccurring nightmares, post-traumatic stress, and the limitations caused by his wounds, Tipper went on to lead a highly productive life. He returned to university, earned his undergraduate degree, credentials, and master’s degree, and became a high school teacher.
He pursued his career with vigor and won awards, including a year-long fellowship study at UC Berkley where he temporarily became a member of the university’s faculty. Ever industrious, he bought a small apartment building as an investment and ran it on the side. He enjoyed hobbies including travelling and snow skiing. Later in life he married and fathered one daughter, Kerry, an attorney today.
What caused Tipper to flourish?
Certainly his own drive to succeed. His own smarts, positive outlook, and persistence.
Yet Tipper also factored in the support he received from a grateful nation. Small gestures had a way of adding up to become part of the overall structure that undergirded his success, he said.
Here’s the part of Tipper’s story I never tire of hearing.
When Tipper first got out of the Army, he walked with a cane and wore an eye patch. He remembers how everybody wanted to do everything possible to show support for the veterans returning home.
“If I ate at a restaurant,” Tipper said, “when I went to the cashier, there was never a bill. Or the waitress motioned with her head and said, ‘A gentleman over at that table has paid.’ Of course I was home almost a year ahead of everybody else. But that sort of thing happened to me a lot.”
That image is what I want to burn into the collective brain of North America today—and of people from every other nation that has seen their sons and daughters fighting the global war against terror. Let that image motivate us to gratitude and self-sacrifice. And let it help collectively heal and restore.
If we see a veteran in a restaurant, let’s pay his bill.
If we see a veteran flying standby, needing a seat in an airplane, let’s give him ours.
May we—as countries and as individuals—do everything we can to show support to our returning troops.
As Ed Tipper’s story shows, even a small gesture of kindness can be important to the transitioning process.
Question: What other ways can we say thanks?